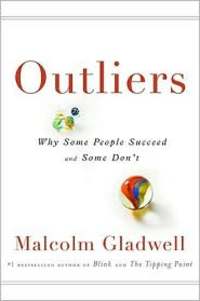 Ever wondered why some people are successful and others are not? Malcolm Gladwell answers that question in his new book about the Outliers. The buzz about the book, as might be imagined, has already started to build to deafening levels ahead of the November 18 publishing date. Using examples from the world of business (Bill Gates) and popular culture (The Beatles), he isolates the reasons for their success. Success, it turns out, is often more circumstantial than based on personal merit.

His breakthrough book The Tipping Point is still on bestseller lists and for good reason — Gladwell has a natural gift for taking data and observations and weaving them into a clear and easy-to-understand framework for people from all walks of life — including movers and shakers in the world of business innovation. In the current issue of New York Magazine, Gladwell has a simple explanation for his own phenomenal pop culture success: “People are experience rich and theory poor. My role has been to give people ways of organizing experience.”