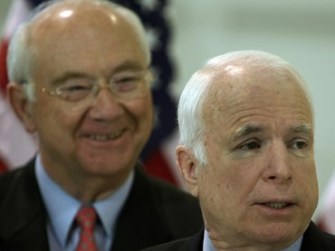 John McCain, in an interview with the NY Times, admitted that he does not know how to use the Web or even email. McCain, who will turn 73 in August, is well behind trends among other Americans his age. Pew reports in its latest survey that more than 30% of Americans age 65 and older are online and this figure is likely to be over 50% among college educated seniors. (For example, my 91 year old Grandfather owns a computer, sends me email, and reads my blog.)

Should we care that McCain lacks even a basic familiarity with the online world? Consider that a President McCain would probably be the only leader at the next G8 meetings who has never experienced first hand the world of globalized information and commerce. Below is the relevant discussion from the NY Times interview:

He said, ruefully, that he had not mastered how to use the Internet and relied on his wife and aides like Mark Salter, a senior adviser, and Brooke Buchanan, his press secretary, to get him online to read newspapers (though he prefers reading those the old-fashioned way) and political Web sites and blogs.

“They go on for me,” he said. “I am learning to get online myself, and I will have that down fairly soon, getting on myself. I don’t expect to be a great communicator, I don’t expect to set up my own blog, but I am becoming computer literate to the point where I can get the information that I need.”

Asked which blogs he read, he said: “Brooke and Mark show me Drudge, obviously. Everybody watches, for better or for worse, Drudge. Sometimes I look at Politico. Sometimes RealPolitics.”

Related
Life
Visualization test
Lorem ipsum dolor sit amet, consectetur adipiscing elit. Nullam id tincidunt mi. Morbi malesuada nulla sit amet est hendrerit tincidunt. Etiam viverra, nisl id volutpat eleifend, est augue sodales orci, […]
L&D Strategy
Transfer of learning: The necessary step to make learning stick
Transfer of learning is a concept that should be top-of-mind when planning any learning and development program. Why? In a perfect world, the billions of dollars organizations collectively spend every […]
Starts With A Bang
Why we’ll never see back to the beginning of the Universe
We thought the Big Bang started it all. Then we realized that something else came before, and it erased everything that existed prior.
Thinking
Is there an afterlife? See how your answer compares to polled Americans
There is more consensus on what heaven looks like than hell.
Thinking
How science changes the way we think, according to 10 leading scientists
A group of prominent scientists shares how research has changed them.
Up Next
Guest Thinkers
Is James Inhofe Laying Low on Climate Change?
As I’ve argued before, conservatives often have the advantage in elections and policy battles because of their tendency to enforce greater message discipline and coordination. The latest example is James […]