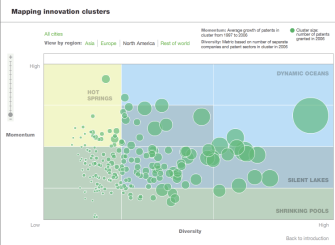 How innovative is your city? McKinsey Digital has released a new innovation study of the world’s leading cities, grouping them into one of four different categories — “hot springs,” “dynamic oceans,” “silent lakes,” and “shrinking pools.” The most innovative cities are “dynamic oceans,” while the “hot springs” are the types of cities with a lot of economic momentum, but in need of a little Creative Class infusion to make them even more vibrant and diverse. In the chart above, Silicon Valley stands alone as the dominant innovation cluster in the world.

While it’s not a real stretch to see Silicon Valley as the dominant “dynamic ocean” of innovation in the world, who knew that Kiel, Germany and Miyazaki, Japan are among the hottest up-and-coming innovation clusters in the world? (In fact, there’s a whole handful of Japanese cities that made the cut as “hot springs” of innovation) And, conversely, that New York, Chicago and Philadelphia are “silent lakes” of innovation? By some measures, even the Twin Cities are more vibrant than their East Coast counterparts.

How to hit an innovation Grand Slam

As the economic recession continues to take a bigger and bigger toll on people’s livelihoods, a number of companies are stepping up with new promotions that seek to reduce some […]