Here’s how we’re doing at collectively creating a list of model 21st century schools that are doing a nice job of infusing 21st century skills, digital technologies, problem- or inquiry-based learning, and other innovative practices into their school organization: 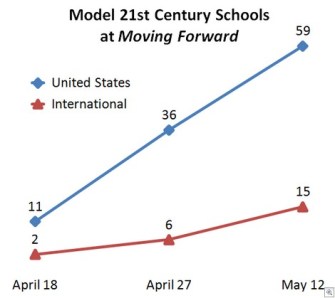 Those 59 United States schools represent 26 states. The International schools are in 10 different countries.

So we’re making GREAT progress. However, we still have a number of states (and countries) that don’t have a single school organization listed. I know that there are schools in every state that are doing wonderful things in the areas of problem-based learning, 21st century skills, or technology integration. Would you help us identify more model schools, either by adding them yourself or passing this quest along to others? We are in desperate need of good models that educators can learn from and visit. Thanks!