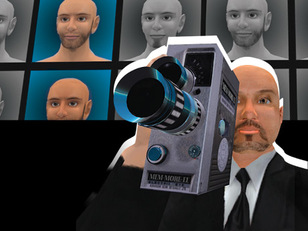 While the initial hype surrounding virtual worlds such as Second Life has somewhat faded over the past year, it’s exciting to see that CINEMAX plans to run a 10-part documentary film about Second Life (“Molotov Alva and His Search for the Creator: A Second Life Odyssey”) starting this Thursday. It’s innovative enough to do a film about virtual worlds, but what makes this film especially stand out is that it is shot entirely inside Second Life, machinima-style.

Last year, I had the unique opportunity to work with a talented machinima director on a similar type of project for a major client, and it’s really extraordinary the effort and time that goes into filming inside Second Life. There are sets, actors, scripts — basically, anything that goes into making a traditional film. Mad props to Douglas Gayeton for getting this film made and finding a cable TV sponsor (CINEMAX) bold enough to show it.