The School Administrators of Iowa (SAI), which has been a critical partner and steadfast supporter of our work here at CASTLE, asked all of its members to recommend some advocacy priorities for this year’s legislative session. Here were the choices given (click on image for larger version): 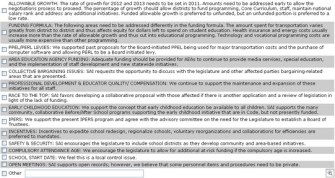 These are important, but I thought something was missing. Here’s what I put under ‘Other’:

What do you think SAI’s (or your state leadership associations’) legislative advocacy priorities should be this year?

I have been known to say that there’s not much in your children’s textbooks that isn’t available in at least a dozen places online for free. But, hey, maybe I’m […]