Three days ago, I received an email from Eruptions reader Gijs de Reijke who was curious about something he noticed in the daily OMI SO2 images: 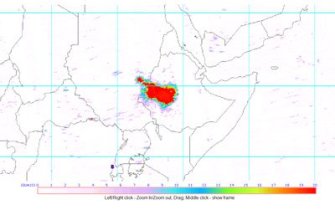 Now, I wasn’t quite sure what to make of it other than the fact that there was an awful lot of sulfur dioxide in the vicinity of Addis Ababa, which seemed odd. If we look at a map of the active volcanoes in Ethiopia (below), a majority of the ones we might suspect if the SO2 was volcano are to the north (Erte Ale, Dallafilla), but this patch is smack-dab in the middle of the country, looking like it could be coming from the Great Rift Valley rather than the usual northern suspect. So, I was a little baffled and told Gijs I wasn’t sure what was happening.

Volcanoes of Ethiopia and northwestern Africa

Well, the question is answered. This morning there was this report on the Volcano List (from Simon Carn of OMI Research Group):

There appears to have been another effusive eruption in the

Karbahi – Manda Hararo region of Afar. There was a MODIS thermal anomaly

indicating surface lava flows. Preliminary analysis (based on SO2

August 2007, but not as large as the Alu-Dalaffilla eruption last

November. I haven’t heard of any visual confirmation of the eruption

from the ground yet.”

Manda Hararo! This is a basaltic shield volcano that is, in fact, in the north of the the country (for reference, it is just to the northwest of Ardoukoba inside Ethiopia), and was previously not believed to be very active – mostly because there were few eye witness reports of lava flows from the volcano historically. However, this is the second eruption from Manda Hararo in the last two years (the last was in August 2007), both lava flow (effusive) eruption (and both spotted by the satellite, either by MODIS or OMI). The eruption in 2007 did prompt evacuations (and 5 deaths) of the sparsely populated area near the volcano.

There have also been thermal anomalies that have been detected by MODIS:

of alerts spread over considerable area for as late as 30 June 2009.

Going back in time, there appeared a large intense cluster (29 June), a

less intense cluster (28-27 June), and then no hits on earlier days.

So, it seems that the eruption might have initiated around June 27th and was most intense (so far) on June 30, when Gijs spotted the sulfur dioxide anomaly over Ethiopia. There have been no eye witness reports of this new activity at Manda Hararo, but it could be expected that this eruption is very similar to that in 2007, so mostly basaltic lava flows (below) that are dangerous when people are caught unprepared to evacuate. Also, there might be significant volcanic gases such as sulfur dioxide and carbon dioxide that could pose a threat to people if they breathe them. Hopefully we’ll have some reports from the ground about the activity soon.

Manda Hararo lava flow in 2007. Image courtesy of the GVP.

Related
The Future
Custom Image Test
Lorem ipsum etc etc etc etc
Life
Visualization test
Lorem ipsum dolor sit amet, consectetur adipiscing elit. Nullam id tincidunt mi. Morbi malesuada nulla sit amet est hendrerit tincidunt. Etiam viverra, nisl id volutpat eleifend, est augue sodales orci, […]
L&D Strategy
Transfer of learning: The necessary step to make learning stick
Transfer of learning is a concept that should be top-of-mind when planning any learning and development program. Why? In a perfect world, the billions of dollars organizations collectively spend every […]
Starts With A Bang
Why we’ll never see back to the beginning of the Universe
We thought the Big Bang started it all. Then we realized that something else came before, and it erased everything that existed prior.
Thinking
Is there an afterlife? See how your answer compares to polled Americans
There is more consensus on what heaven looks like than hell.
Up Next
Guest Thinkers
Sarychev Peak: Before and after
Its like Highlights, but with volcanic destruction.