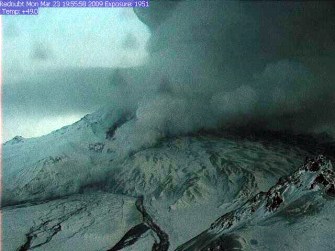 AVO has posted a series of images taken around Redoubt and around the Cook Inlet since the new eruptions started the night of March 22nd. You can begin to see the extent of the ash fall, what the explosions have done to the Drift Glacier and the new deposits in the Drift River valley. Most of the images show a lot of meltwater mudflows and tephra deposits on the slopes of the volcano. They’ve also added images from satellite and radar sources that show the initial dispersal of ash from the eruptions throughout the area north of Redoubt.

Eruptions reader Akira Shirakawa has put together an excellent (and I mean excellent) video montage of images from the Hut camera (which, bizarrely, came back to like spontaneously yesterday), with a soundtrack of “converted digital seismic traces”. It captures the sixth explosion that occurred yesterday (3/23) evening.

AVO’s current Redoubt information reports that the seismicity is still the same as the last few days, suggesting magma is still on the move into the upper parts of the volcano. Ash advisories posted after yesterday evening’s eruption has been canceled, so now we just wait and watch for more of these explosions that have been producing 50,000 foot / 15,000 meter ash columns and depositing fine ash around the region (typical activity for Redoubt). If these eruptions are similar to 1989-1990, we should expect some dome growth in the following weeks/months.

In some of the “day after” news, the brunt of the ash fall from yesterday’s eruption hit the town of Skwentna (70 miles NW of Anchorage) and left Anchorage, Wasilla and other population centers virtually untouched – other than canceled flights. You can see some of the regional ash effects in this AP video. Sounds like some people had to be rescued after getting trapped in the ash fall on Mt. McKinley/Denali. And really, there is nothing like a good volcanic eruption to get people talking “earth science funding”. I think it is safe to say that Redoubt caught few people truly “by surprise” with its eruption, leading to very little drama on the human side of the volcano mitigation equation.

Related
Life
Visualization test
Lorem ipsum dolor sit amet, consectetur adipiscing elit. Nullam id tincidunt mi. Morbi malesuada nulla sit amet est hendrerit tincidunt. Etiam viverra, nisl id volutpat eleifend, est augue sodales orci, […]
L&D Strategy
Transfer of learning: The necessary step to make learning stick
Transfer of learning is a concept that should be top-of-mind when planning any learning and development program. Why? In a perfect world, the billions of dollars organizations collectively spend every […]
Starts With A Bang
Why we’ll never see back to the beginning of the Universe
We thought the Big Bang started it all. Then we realized that something else came before, and it erased everything that existed prior.
Thinking
Is there an afterlife? See how your answer compares to polled Americans
There is more consensus on what heaven looks like than hell.
Thinking
How science changes the way we think, according to 10 leading scientists
A group of prominent scientists shares how research has changed them.
Up Next
Guest Thinkers
Redoubt ash throws off Alaska’s legislative calendar
Redoubt stops Alaskan politics and the eruption continues.