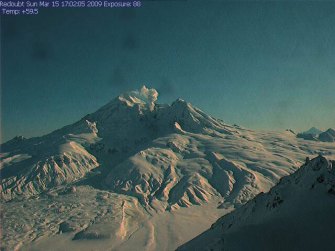 A quick note (as I’m buried in zircon): The Alaska Volcano Observatory has installed a webcam at Redoubt to monitor for an eruption. It is a little cloudy today (not the image above), so not much can be seen, but who knows, maybe you can catch the volcano in action if it erupts. The status remains at Orange (heightened risk of eruption) and AVO will monitor the volcano around the clock until things change (eruption or return to background).

UPDATE (11:34 AM): Just as I posted this, I saw a very brief article that mentions something I hadn’t heard before: AVO has noted some muddy debris flows along the glacier that is downslope of the summit. This might suggest that things are getting warmer near the vent as the magma ascends in the edifice. Things might begin to move quickly at Redoubt.

nnIt is hard to believe that the eruption at seem to come out of nowhere at Chaiten started over 8 months ago now, and apparently is still not showing many […]