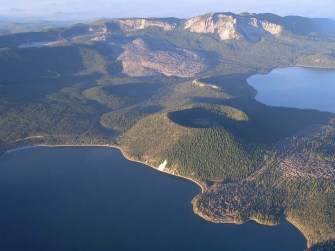 The Oregonian reports on the on-going desire to develop geothermal power in the Oregon and California Cascades and backarc. There have been attempted (or at least exploration) to develop geothermal power at Newberry Volcano, Crater Lake and Medicine Lake, but none have ever panned out. Well, it seems like this time it might happen, and I, for one, think it is a good idea. Of course, there are a lot of folks who don’t want a geothermal plant anywhere near Newberry, especially with its National Monument designation, but one of these days we’ll have to choose between that and higher energy costs. Iceland seems to be able to live with the close proximity of geothermal energy plants and people, so maybe we should get used to it as well.