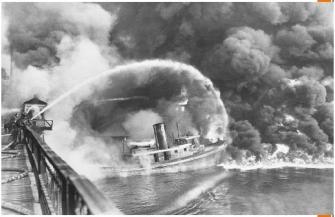 In her speech to open the session, Boxer compared the moment to the early 1970s, when a burning Cuyahoga River and the nation’s smog filled cities galvanized Congress to take action on clean air and clean water. “It’s once again our turn again to stand up and lead this greatest country on earth to a bright future that will energize our people here at home and the whole world” declared Boxer. “This is a challenge we can and will meet.”

Meanwhile, former Senate GOP committee chair James Inhofe is hitting the conservative media outlets to dispute the reality and urgency of climate change, appearing today on Fox and Friends, CNN’s Glenn Beck, and the Sean Hannity radio program. With opinion-leaders like Inhofe and a “safe zone” of like-minded content at the conservative shows, is it any wonder that only 23% of college-educated Republicans believe that global warming is caused by human activities?

Over in the House, a different framing is taking shape, as Henry Waxman held hearings on the “muzzling” of government scientists, interjecting a complementary public accountability interpretation into coverage. This angle emphasizing government censorship and “disgruntled” whistle-blowers shifts global warming to the political beat and into wider focus across news coverage.

“What’s new” is that personal testimony is backed up by the perceived authority of quantitative evidence. A survey by the “non-partisan watchdog group” the Union of Concerned Scientists reports that 120 scientists across seven Federal agencies say they have been pressured to remove references to “climate change” and “global warming” from a range of documents, including press releases and communications with Congress. Roughly the same number say appointees altered the meaning of scientific findings on climate contained in communications related to their research.

“We are beyond the anecdotal,” Francesca Grifo, director of the scientific integrity program at the Union of Concerned Scientists (UCS) is quoted as saying. “We now have evidence to support the view that this problem goes deeper than just these few high-profile cases.”