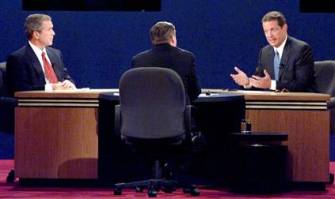 Bush-Gore Debates 2000: The focus was on performance rather than substance.

For those that have seen the Nisbet/Mooney Speaking Science 2.0 talks over the past year, you might have witnessed during the Q&A some disagreement over the merits of actually having the presidential candidates participate in a “Science Debate.”

As I have said at these talks, I think the goal of raising the profile of science and environmental policy in the presidential election is a good one, it’s just that I have doubts about whether or not pushing for an actual debate between the candidates is the right strategy for achieving this goal. (Never mind the likelihood of getting the debate commission, networks, and candidates to agree to a science-exclusive debate.)

Having a Republican and Democrat stand on stage discussing science policy would send the strongest signals to a miserly public that these issues can easily be re-interpreted via the mental box of partisanship. Moreover, it’s unlikely that the candidates would actually discuss science, instead their remarks would be carefully framed to evoke ideology or emotion, and to make small differences on policy into openings for attack politics.

Case in point: Read this transcript of Clinton, Obama, and Edwards at the Nevada primary debate discussing their positions on Yucca mountain and investment in nuclear energy. Though it raises the salience of the issue, there’s little or no actual science content in their answers, and in several cases even where Clinton and Obama agree on policy, Clinton uses the occasion to attack Obama about his industry campaign donors, strikes for emotion by connecting energy policy to Dick Cheney, while Edwards similarly moves on the attack!

Most importantly by putting science on stage in an October general election debate (or even in the primaries), science advocates and organizers lose control of the message. At the WPost today, Howard Kurtz neatly summarizes how the substance of past presidential debates have immediately been translated by campaign strategists and the news media into week long spectacles over gaffes, gotcha moments, or meaningless incidents that fit larger campaign narratives about presidential personality. These debates are not scored on substance, but rather on performance and style.

Remember Gore’s sighs and Lockbox in 2000? The bulge in Bush’s jacket in 2004? Kerry’s reference of Cheney’s lesbian daughter in an answer about gay marriage? When George W. Bush looked at his watch in 1992? When Dukakis was too cool in answering a hypothetical question about the gang rape and murder of his wife?

“It’s always the gaffes that make the news at the debates,” Craig Crawford, a columnist for CQPolitics.com tells Kurtz. “Sometimes they’re real and sometimes they’re manufactured. It’s the gotcha mentality of our campaign coverage.”

For tomorrow night’s debate, expect the mundane in post-debate coverage. “There will be long dissertations on ‘Can Obama make an emotional connection with viewers? Why doesn’t he talk in sound bites?’ ” Walter Shapiro, Salon’s Washington bureau chief tells Kurtz. “There are going to be gimlet eyes looking at whether McCain fatigues in the last half-hour,” as a way of judging whether he’s too old for the job.

For 2012, my suggestion is the narrow goal of a candidate debate be dropped, the initiative start very early, and be relabeled “Science Election 2012” or something along those lines. Instead of pushing for a debate, science advocates should marshal their financial resources behind an independent, nonpartisan advertising, opinion leader, digital networking, and news agenda campaign, modeled after the AARP’s Divided We Fail initiative on health care, Bono and Gates’ One campaign on global poverty, or Gore’s We campaign. With these kinds of initiatives, science advocates control the message and there can be a sustained drive at making science policy salient across the summer and fall, instead of just the week or so around a debate.

Science Debate 2008 was successful in getting the candidates to fill out a questionnaire about their science policy positions with excerpts printed at the NYTimes and LA Times. Yet a “Divided We Fail”-like advertising, opinion-leader, digital networking, and media initiative would likely have been able to achieve the same result and much more, without the potential thorny perceptual misfires that an actual Science Debate would likely catalyze.

Do Roughly 40% of Americans Agree with Palin on Abortion?

While many Democrats and women find Palin’s support for criminalizing abortion to be outrageous, a recent survey by the Pew organization finds that roughly 40% of Americans generally agree with […]