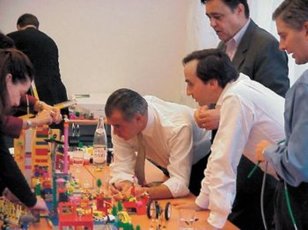 In this week’s Readymade newsletter, Chad Farneth highlights the “Serious Play” program at LEGO, which offers a way for managerial teams to experiment with innovation in a fun, non-threatening way:

“All work and no play? According to Lego, the answer to the daily grind

is a little bit of productive play. Lego has developed a program known

as Lego Serious Play (LSP) that is creating a major buzz within the business world. Check it out here. Fresh minds do better work seems to be the driving force behind this Lego move, and as an innovation blog, we applaud them.  This article

integral part in creative thought. Next time you are bogged down at the

office, tell your boss you just need to expense some Lego’s…”

Anyway, it looks like LEGO has signed up 53 partners in 27 different countries to offer the Serious Play program to executive teams around the world. Within the USA, for example, certified training programs are based in Kansas, Utah and Massachusetts.