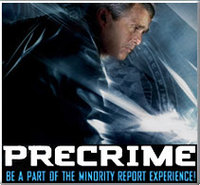 Is it just me, or does this sound like the creation of the Pre-Crime Unit from the movie Minority Report? The Rutgers newspaper reports that the Department of Homeland Security is working with Rutgers University to develop a computer program that can monitor suspicious

social networks and opinions found in news stories, Web blogs and other

Internet content in order to identify terrorist crimes before they are even committed:

software and algorithms could rapidly detect social networks among

entities trying to conceal themselves under different aliases. It

opinions – such as anti-American sentiment – that would otherwise be

difficult to do manually.

The program is designed to sift

rapidly through huge amounts of data. It has also been described as a

sort of “Super Google” researchers such as Eduard Hovy at The

University of Southern California, to explain the scope and quickness

of the technology. One of the ideal results would be for

Homeland Security officials to be able to “find a suspicious group

based on its pre-event communication activity before they act,”

according to a PowerPoint presentation used by researchers to explain

As one professor from Rutgers points out, such a computing system would have “the potential for abuse” if people knowingly or unknowingly expand the definition of “terrorist” to include “anyone who is opposed to the current administration and wants to form a protest group.” Anyway, as with most things, the overall idea is good, but it’s the implementation that’s tricky. Just ask Felix Dzerzhinsky, the founder of the Russian organization that eventually became the KGB. (When he founded the group, it was called the “All-Russia Extraordinary Commission to Combat Counter-Revolution and Sabotage.”)