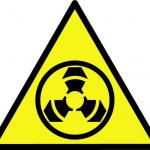 From high culture to pop culture, art can serve as a rallying point for social groups and activists who want to publicize their reservations about areas of science and technology. Consider Patricia Piccinini’s powerful “We Are Family” exhibit that has shown in Europe and Australia. Her work captures much of the public’s “yuck” factor sentiment when it comes to visions of animal/human hybrids and cloning.

Alternatively, consider the current contest in Canada to design the top “nanohazard” symbol. Here’s what the Washington Post’s Rick Weiss had to report over the weekend:

While many scientists believe that most nanomaterials will ultimately prove to be benign, ETC Group — which has called for a moratorium on the marketing of nanoproducts until more safety studies are done — believes in erring on the side of caution. That led to the realization that there is not yet a widely recognized way to warn people of the little risks around them. Other toxic hazards have signs and symbols that everyone has come to know (think: The Nuclear Hazard sign, the Biohazard sign, the generalized Toxic Hazard sign with its skull and crossbones). But how to symbolize, in a way that everyone can understand, the potentially dangerous presence of something inconceivably small? “We decided to launch a competition, to get a good design and to raise public awareness,” said Hope Shand, ETC’s research director. “We thought we might receive a dozen entries or something.”