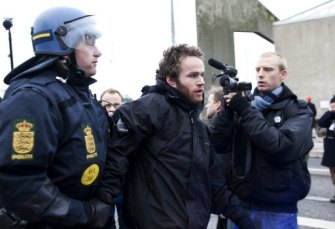 From the Associated Press to the Guardian to Reuters to Agence France Presse,protesters and journalists create a confusing storyline focused on chaos, conflict, and law and order

It’s too early to say what impact the protests in Copenhagen will have on the negotiating process or on world public opinion. However, when it comes to social protest generally, past research suggests several common and powerful barriers to communication success. There are a few rare exceptions, such as the Civil Rights marches of the 1960s, but on issues such as world trade, food biotechnology, or the war in Iraq, social protest has had difficulty achieving effective communication outcomes.

Protests over climate change are unlikely to be any different. Which raises the question: By taking to the streets, do climate advocates undermine the chances of policy action? A preliminary answer might be in the affirmative. Consider, for example, that the Agence France Press image at the top of this post serves as the visual frame in more than 300 news stories worldwide.

Generally, not only are participating protest groups, despite passion and months of intensive planning, often disorganized and uncoordinated in their message, but they also often fail to consider even the very basics when it comes to effective visuals and storylines for the mainstream media, the broader public or policymakers, the supposed direct target of their campaign.

The messages certainly appeal to protesters, reinforcing ideology and recruiting like-minded others to the cause, but these very same messages may actually serve to undermine the ability of the protests to achieve policy outcomes or to influence public opinion.

The unfortunate communication mish-mash offered by protest groups is made worse by the routinized tendencies of journalists and news organizations in covering social protest. Below are four possible frames through which the media historically cover protest, drawn from a body of scholarship that has labeled these media tendencies “The Protest Paradigm.”

Research finds that protest is almost exclusively covered through the first two frames of reference and it is rare that coverage spans into more substantive or sympathetic portrayals of the protest event.

My reading of the protest coverage this morning suggests to me that predictably, journalists have applied the first two frames and storylines to the Copenhagen protests [For examples, see links in the caption to the picture atop this post]:

Showdown with policy or public officials, Dissection of strategies and tactics, Comparison or association frame with other groups that legitimize or marginalize

Protest defined as creative expression or as unjust prosecution. An emphasis on telling “our story” or that “protesters are not alone” in working for change.

The debate: Focuses on issues and complaints.

The Copenhagen protests offer the opportunity for an in depth scholarly analysis of key differences by country or across news organizations, blogs, and alternative media in how the protests have been portrayed. Consider, for example, coverage at the NY Times and WPost, which features elements of the second and fourth frames in this typology, respectively.

Related
Life
Visualization test
Lorem ipsum dolor sit amet, consectetur adipiscing elit. Nullam id tincidunt mi. Morbi malesuada nulla sit amet est hendrerit tincidunt. Etiam viverra, nisl id volutpat eleifend, est augue sodales orci, […]
L&D Strategy
Transfer of learning: The necessary step to make learning stick
Transfer of learning is a concept that should be top-of-mind when planning any learning and development program. Why? In a perfect world, the billions of dollars organizations collectively spend every […]
Starts With A Bang
Why we’ll never see back to the beginning of the Universe
We thought the Big Bang started it all. Then we realized that something else came before, and it erased everything that existed prior.
Thinking
Is there an afterlife? See how your answer compares to polled Americans
There is more consensus on what heaven looks like than hell.
Thinking
How science changes the way we think, according to 10 leading scientists
A group of prominent scientists shares how research has changed them.
Up Next
Guest Thinkers
Environmental Health Perspectives on Framing and Science Communication
The journal Environmental Health Perspectives leads off its December issue with a news feature on the relevance of framing research to science communication. For readers who have followed recent review […]