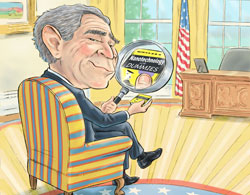 E-Magazine has a feature out on the (non)-role of science issues in this year’s presidential race as well as the failed attempts at a Science Debate. I’m quoted in the article, as is my friend Chris Mooney, and other experts such as Harvard’s Sheila Jasanoff.

Of note are these plans and comments from Obama’s science staffer:

Democratic nominee Barack Obama often cites the role of science and technological innovation in driving the U.S. economy. Jason Grumet, Obama’s climate change advisor, told E, “Senator Obama believes that there is a fundamental need for transparency in government. He does not believe that you can answer political questions solely with science, but there has to be clarity and integrity in how science is used in the political process.” Grumet says that the campaign has created a science policy group to search out ways to elevate the role of science in government. Some of the ideas under development include setting conflict-of-interest rules for scientific advisory boards, ensuring that political appointees in positions with research mandates have proper scientific credentials, and creating a new scientific advisory group for the president.

Two essays I wrote on Expelled are now in print and I have placed PDFs of the articles online. The first shorter essay appears at Skeptical Inquirer magazine and reviews […]