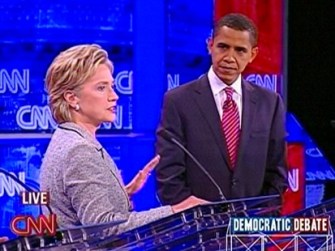 According to a new Pew polling analysis, religion is not proving to be a clear-cut positive in the 2008 presidential campaign. According to Pew, candidates viewed by voters as the least religious among the leading contenders are the current front-runners for the Democratic and Republican nominations – Hillary Clinton and Rudy Giuliani, respectively. On the other hand, the candidate seen as far and away the most religious – Mitt Romney – is handicapped by this perception because of voter concerns about Mormonism. In all, according to the analysis, it is far better for a candidate to be preferred as “somewhat religious” rather than extreme in their faith.

Many Americans are even willing to vote for an atheist, with slightly more than a third of respondents saying that if a candidate “doesn’t believe in God,” it would make little difference to their vote. While it is true that a hypothetical atheist candidate rates poorly in comparison to other religious minority groups such as Mormons and Muslims, it’s hard to forecast what actual public opinion would be if a strong and charismatic non-religious leader were to step into a major political race. The key for this leader would be to reach across faith groups, accenting common goals and values. Time will tell, hopefully.

At Science, Four Letters on Framing and Our Reply

Science has published four letters in response to our framing article along with a fifth letter as our reply. As it turns out, I know two of the correspondents fairly […]