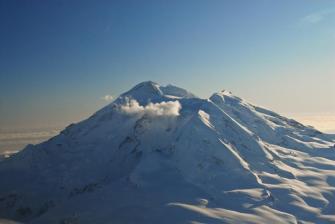 nnRedoubt (above) is definitely taking its time. After catching everyone’s attention last week with seismic activity, melting of its snow cap and increased gas emissions, the volcano is still, well, doing all those things, but not erupting. AVO’s update are beginning to sound like a broken record:n

“(2/3/09 04:10) Unrest at Redoubt Volcano is continuing with elevated seismicity well above background levels. The volcano has not erupted. A gas/observation overflight yesterday reported continued changes in the summit glaciers indicative of heating of the summit area. Photos from both the overflight and the hut webcam showed a small vapor plume at the summit. The web camera is now dark as our long winter night continues.”

nIt is amusing to catch a bit of snarkiness from the AVO staff at the end of the update but hey, if I was up posting at 4 in the morning, maybe I’d throw that in as well.nn

You can get an idea of what life might be like at the Alaska Volcano Observatory from this article on CNN. They talk to USGS volcanologist (and fellow Williams College alum)  Michelle Coombs who says that Redoubt is still predicted to erupt in the next days-to-weeks timeframe. However, this whole drama with Redoubt shows the challenges of predicting volcanic behavior: we can have these volcanoes wired and watched 24/7, yet when exactly it will erupt is still anyone’s guess. We still have a lot to learn about how magmatic systems behave and how that translates into eruptions, which is part of the reason why it is so exciting to study them!

With that, the wait continues.

Related
Life
Visualization test
Lorem ipsum dolor sit amet, consectetur adipiscing elit. Nullam id tincidunt mi. Morbi malesuada nulla sit amet est hendrerit tincidunt. Etiam viverra, nisl id volutpat eleifend, est augue sodales orci, […]
L&D Strategy
Transfer of learning: The necessary step to make learning stick
Transfer of learning is a concept that should be top-of-mind when planning any learning and development program. Why? In a perfect world, the billions of dollars organizations collectively spend every […]
Starts With A Bang
Why we’ll never see back to the beginning of the Universe
We thought the Big Bang started it all. Then we realized that something else came before, and it erased everything that existed prior.
Thinking
Is there an afterlife? See how your answer compares to polled Americans
There is more consensus on what heaven looks like than hell.
Thinking
How science changes the way we think, according to 10 leading scientists
A group of prominent scientists shares how research has changed them.
Up Next
Guest Thinkers
More signs of melting at Redoubt
The “eruption watch” continues at Redoubt … Saturday revealed that things are getting hotter at the summit near the 1989/1990 dome (see picture above that made Redoubt famous in 1989). […]