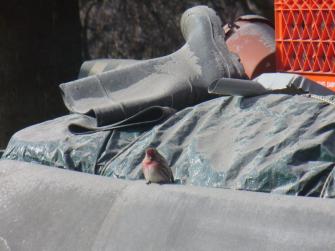 Image courtesy of AVO/USGS by Cindy Koplin showing the ash fall in Homer, AK on 4/4/09

Not much new to report about the eruption at Redoubt beyond the fact that it continues. AVO has kept the warning level at Red/Warning after briefly dropping it to Orange/Watch on Friday night. The 15,000 foot / 5 km-tall plume on Sunday was mostly water and volcanic gases. Eagle-eyed observers also noticed a plume on the lower flanks on the north side of the volcano that is believed to be steam generated by block & ash flows interacting with snow or water. These flow block & ash flows are coming from the crumbling new dome forming below the 1989-90 domes.

No data so far from the gas flight AVO planned for Sunday, however we do have some sulfur dioxide data showing the plume from Redoubt heading out over the Pacific as of 4/4/2009 from the OMI satellite. There is a lot of chatter about the potential climate effects of the Redoubt eruption and so far there has been very little data to actually make any statements. However, the eruption, so far, has been fairly small in the great scheme of volcanic eruptions (lets say versus Pinatubo in 1991 or El Chichon in 1982) but once we have an idea of the sulfur and carbon dioxide output we can begin to model any potential atmospheric effect.

The ash fall from Redoubt (see above) is beginning to make national news as the winds blow it into more populated areas. So far, the ash has been nothing but a nuisance, but people have a low threshold for nuisances on the whole. It doesn’t stop folks from saying things like:

To that I say: be careful what you wish for. It will be interesting to see how people cope with intermittent ash fall for a few months. CNN is even reporting on AVO’s use of Twitter to inform the public on Redoubt’s activity, albeit 3 months after AVO started.

Related
Life
Visualization test
Lorem ipsum dolor sit amet, consectetur adipiscing elit. Nullam id tincidunt mi. Morbi malesuada nulla sit amet est hendrerit tincidunt. Etiam viverra, nisl id volutpat eleifend, est augue sodales orci, […]
L&D Strategy
Transfer of learning: The necessary step to make learning stick
Transfer of learning is a concept that should be top-of-mind when planning any learning and development program. Why? In a perfect world, the billions of dollars organizations collectively spend every […]
Starts With A Bang
Why we’ll never see back to the beginning of the Universe
We thought the Big Bang started it all. Then we realized that something else came before, and it erased everything that existed prior.
Thinking
Is there an afterlife? See how your answer compares to polled Americans
There is more consensus on what heaven looks like than hell.
Thinking
How science changes the way we think, according to 10 leading scientists
A group of prominent scientists shares how research has changed them.
Up Next
Guest Thinkers
Oil from the Drift River Terminal near Redoubt to be moved
Finally, after months of inaction, the Coast Guard has ordered the emptying of the Drift River Oil Terminal at the base of Redoubt.