Redoubt seems to be setting its pattern for this part of the new eruptive period. There was another small explosion this morning that produced at 15,000 foot / 5,000 meter ash column that moved to the NNW. The seismicity has settled down since the early morning eruption today (3/25) as well.

These types of explosions producing plinian and subplinian eruption clouds that will likely lead to dome building – the same pattern seen at Mt. Saint Helens in 2004-2008 and the previous Redoubt eruptions in 1989-1990. These explosions, producing ash columns that reach tens of thousands feet, will likely continue to occur for weeks to months. 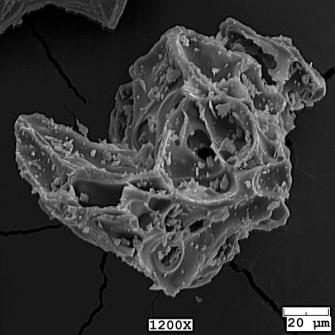 Image courtesy of AVO/UAF-GI by Izbekov, Pavel and Shipman, Jill

AVO has posted some excellent SEM (scanning electron microscope) pictures of ash from the Redoubt eruptions (see above) along with a myriad of other eruption-related images. If you’re curious about one way to tell the different between juvenile (fresh) magma ash and old (accidental) ash made from crushing dome rock, check out the difference between these pictures: ash from the 3/15 explosion -or- ash from the 3/23 explosions. Can you tell the difference? The 3/15 ash, made from pulverizing the old dome rock of Redoubt, is jagged and angular, lacking vesicles (air bubbles). The ash from 3/23 is clearly cuspate and contains lots of stretched vesicles, indicating it was initially made of magma that was molten enough to all gas bubbles to form, try to escape and stretch (see also the image above). This makes it very clear that the 3/15 explosion did not release any juvenile magma, while the 3/23 and beyond eruptions have.

It also looks like the eruption has now shut down the Drift River oil terminals, just like one might expect when you put an oil terminal in the outwash fan of a river that is at the base of an active volcano. The terminal is undamaged according to the Coast Guard, but the shutdown will likely cause some problems with oil movements within the Cook Inlet in the short term.

Related
Life
Visualization test
Lorem ipsum dolor sit amet, consectetur adipiscing elit. Nullam id tincidunt mi. Morbi malesuada nulla sit amet est hendrerit tincidunt. Etiam viverra, nisl id volutpat eleifend, est augue sodales orci, […]
L&D Strategy
Transfer of learning: The necessary step to make learning stick
Transfer of learning is a concept that should be top-of-mind when planning any learning and development program. Why? In a perfect world, the billions of dollars organizations collectively spend every […]
Starts With A Bang
Why we’ll never see back to the beginning of the Universe
We thought the Big Bang started it all. Then we realized that something else came before, and it erased everything that existed prior.
Thinking
Is there an afterlife? See how your answer compares to polled Americans
There is more consensus on what heaven looks like than hell.
Thinking
How science changes the way we think, according to 10 leading scientists
A group of prominent scientists shares how research has changed them.
Up Next
Guest Thinkers
Redoubt ash throws off Alaska’s legislative calendar
Redoubt stops Alaskan politics and the eruption continues.