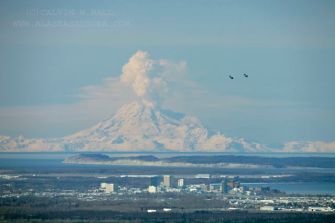 Redoubt in April 2009 with Anchorage in the foreground (along with two F-22 Raptors). Image courtesy of Calvin Hall.

It has been quite some time since I talked about Redoubt, mostly because the volcano has been in the “slow extrusion of a dome” mode that has not generated much beyond impressive steam (with some ash) plumes. The volcano continues to stay at Orange/Watch status. I did glean a few interesting facts and speculations about the future at Redoubt from Dr. Jake Lowenstern of the USGS the other day, including:

In other Redoubt news, more oil has been removed from the Drift River Oil Terminal. Apparently the Cook Inlet oil fields are likely down for the count if oil production ceases for more than a month, so we might be seeing the end of oil production in Cook Inlet – luckily these oil wells are not highly productive (versus other parts of Alaska). Almost 93% of the oil stored at DROT has now been removed. The future of the Terminal continues to be in doubt.

A special thanks to Calvin Hall for sending me more of the great Redoubt images (above and below) he has been taking since activity began. 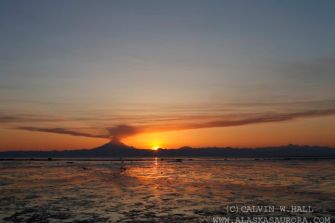 Related
Life
Visualization test
Lorem ipsum dolor sit amet, consectetur adipiscing elit. Nullam id tincidunt mi. Morbi malesuada nulla sit amet est hendrerit tincidunt. Etiam viverra, nisl id volutpat eleifend, est augue sodales orci, […]
L&D Strategy
Transfer of learning: The necessary step to make learning stick
Transfer of learning is a concept that should be top-of-mind when planning any learning and development program. Why? In a perfect world, the billions of dollars organizations collectively spend every […]
Starts With A Bang
Why we’ll never see back to the beginning of the Universe
We thought the Big Bang started it all. Then we realized that something else came before, and it erased everything that existed prior.
Thinking
Is there an afterlife? See how your answer compares to polled Americans
There is more consensus on what heaven looks like than hell.
Thinking
How science changes the way we think, according to 10 leading scientists
A group of prominent scientists shares how research has changed them.
Up Next
Guest Thinkers
Fernandina roars back – UPDATED
Either the eruption at Fernandina has kicked back up again, or, based on the accompanying photo, we’ve landed on Gliese 581 D.