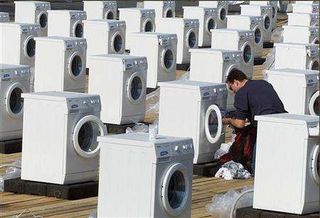 After a long 10-month period in which the word “innovation” seemed to be deleted entirely from the lexicon of Corporate America’s middle managers and top executives, I’ve been spotting more and more articles about the innovation efforts at some of America’s leading companies as they battle their way out of a recession. It seems that each company is taking a particular tack to the issue — but all of them share the idea that an “innovation process” can be replicated time and time again, rather than being something that occurs once (or not at all) in a very haphazard way.

For lack of a better word, there are various “flavors” of corporate innovation. Writing for Harvard Business, innovation guru Scott Anthony reviews Cisco’s “innovation-by-committee” model, while Jessie Scanlon of Business Week recently took a closer look at the way that Whirlpool puts new ideas through the wringer. And, of course, articles about innovation at Google and the ways that employees bring their innovative ideas to top management are de rigeur for the mainstream business media.

What are some other “flavors” of corporate innovation?

The Early Adopters Aren’t Always Who You Think They Are

nWithin the tech world, the explosive growth of Twitter has (literally) been front page news over the past six months, with Twitter appearing on the cover of TIME Magazine and […]