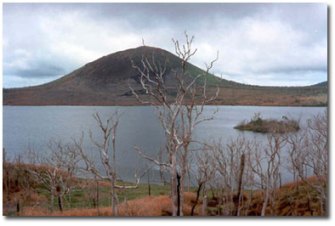 Gaua volcano in Vanuatu is showing signs that it could be headed towards an eruption. News reports from the island nation in the south Pacific Ocean mention “increased seismic activity, generating sulphurous gas and ash into the atmosphere and affecting water supplies.” However, officials in Vanuatu have only raised Gaua’s alert status to 1 on a scale of 5 and stories of previous evacuations suggest that people might not take the volcano that seriously if it does continue to rumble:

My father and one of my brothers was on Gaua when there was evacuation in 1973. They spent two months in Sola which is the provincial headquarter. For two months they were there, they thought a big eruption would happen it never happened. (EWK: my emphasis).

Gaua is a stratovolcano that produced numerous eruptions, most recently in 1982 (VEI 2), but there have been frequent VEI 2 eruptions over the last 50 years. Most of the eruptions from the Mt. Garat, part of a summit complex in this caldera-related system (which formed the lake on the island). The eruptions are easily mildly explosive producing tephra-and-ash deposits along with some lava flows that have made it to the sea. The summit area has experienced intense fumarolic activity since its last eruption in 1982, so these new reports could be part of this system rather than signs of an impending eruption.

With spring comes some clear views of Chaiten in Chile, still going strong after 16 months of erupting.