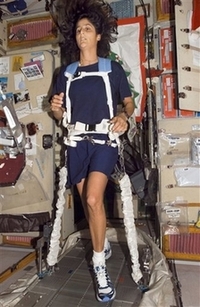 If you think running a marathon is difficult, try running one while floating hundreds of miles through low-Earth orbit at 17,500 mph. According Yahoo! News, a U.S. astronaut will compete in this year’s Boston Marathon, despite being a crew member of the international space station:

“Suni Williams is registered for next month’s Boston Marathon, even thoughnshe’ll be stuck on the international space station when the rest of thenfield lines up for the 111th edition of the race. So the U.S. Navyncommander will run the equivalent distance on a treadmill — 210 milesnabove Earth, and tethered to her track by bungee cords so she doesn’tnfloat away.

Not since Ruiz hopped the ‘T’ to the finish line to accept thenwinner’s wreath in 1980 has a Boston Marathon competitor relied sonheavily on public transportation. “She thought it would be cool if she gave it a try,” said Williams’nsister, Dina Pandya, who will run the race the traditional way. “Shensaid, ‘I’ll call you on Heartbreak Hill.'”

There’s only one small problem, of course. The Boston Marathon is set for the same time as the arrival of a bunch of Russian astronauts to the space station. That means Ms. Williams will be battling the astronaut’s equivalent of jet-lag: “I’m not sure the timing will be that she’ll be awake… They’re going to be on Russian time, so they’re kind ofnsleep-shifting.” Plus, in order to keep from shaking the space station with the constant pounding required to run on a space-based treadmill, Suni will be strapped into a vibration-isolation system that adds additional stress and strain to the hips and legs. (Imagine running a marathon while fighting through quick sand, and you’ll get an idea of what she’ll be facing)