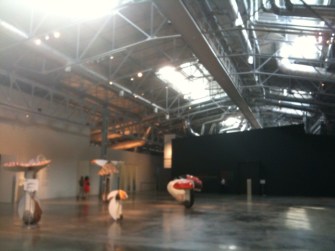 Before leaving for Moscow this summer, I asked people – “What is the one place you’d visit in Moscow that best symbolizes how the city has changed over the past two years?” Time and time again, the answer was “Garazh Dashkina” (literally, “Dasha’s Garage”) — more formally known as the Garage Center for Contemporary Culture. “Dasha,” of course, is Dasha Zhukova, the 29-year-old girlfriend of Russian billionaire oligarch Roman Abramovich. The Garage, a former bus depot designed by Constructivist architects Shukov and Melnikov in the mid-1920’s, has emerged as the most important hub for the contemporary art scene in Moscow and is helping to re-define the “New Russia.”

The New Yorker’s recent profile of Dasha fascinating — she’s fabulously connected (whenever she isn’t sure about a piece of art, she “calls Larry” – as in Larry Gagosian), impossibly wealthy and sophisticated — yet somewhat of a cipher. Art world insiders are dismissive of her, and she’s “bafflingly blank” when it comes to describing her goals and thoughts. At the same time that she’s worked to introduce Mark Rothko, Cindy Sherman, Jeff Koons and Takashi Murakami to the Russian contemporary art public, shes seems more interested in whether or not they’ll get IKEA beanbags in time for a new art installation. (They did, and they were great).

What’s interesting is how a single start-up – in this case, Dasha’s Garage, can give rise to a whole mini-cottage industry of other similar organizations. When I visited Moscow in August, there were at least three other galleries that were buzzing as well, including the Winzavod. Not only that, but the Russian art collector scene seems to have matured as well – instead of riotously overpaying for Western art at auction, there’s a greater emphasis on acquiring the good taste of knowing what to buy, and at what price. (The New Yorker hints, in fact, that an even younger Russian – Maria Baibakova – is emerging as the “next Peggy Guggenheim” in Moscow.) Here’s hoping that Russia’s first garage start-up continues to lead the new wave of creativity and innovation in Moscow.