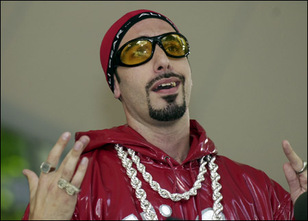 In an effort to revamp its curriculum to focus more on innovation and creativity, Harvard Business School announced on April 1 that

. Cohen, of course, is the brilliant but controversial comic who created “Da Ali G” show and starred in the blockbuster film Borat. According to faculty members at Harvard, Cohen’s course will focus on innovation in the digital media world, but will also blend in cutting-edge ideas from finance and marketing. For example, the film will illustrate the importance of micro-finance credit schemes in emerging nations such as Kazakhstan by requiring students to watch the film Borat in its entirety. According to rumors posted on the Harvard Facebook site, the course will be called “Ali G’s Principles of Rapping, Innovation and Learning” (which will be abbreviated in the course catalog simply as APRIL 101.)

As improbable as it sounds, Ali G was actually the Class Day speaker in June 2004 at Harvard, when he brought his innovative brand of comedy to the Ivy League campus:

Show,” amused, shocked, and provoked graduating seniors and their families

at Class Day 2004. Acknowledging that the graduating seniors were “da most

cleverest of students in America,” Ali G peppered his speech with the malapropisms

and mania that he is known for in his HBO production “Da Ali G Show.”

Ali G referred to the honor of addressing a Harvard graduating class, especially

as Harvard has produced such celebrated alumni such as “Lyndon Baines Johnson,

or as he is known, JFK,” and “President George Clinton.” Although

British-born Baron Cohen graduated with a degree in history from Cambridge University,

have “memorized the entire alphabet, A to X,” and history students who

know facts such as “what Lincoln gave to America, apart from the Town Car.”

Harvard B-School officials were quick to point out that Sascha Baron Cohen has a degree in history from Cambridge University, and that “the approach to innovation by Mr. Sacha Baron Cohen will be serious, thought-provoking and wholly in keeping with the standards of America’s third-best university… He’s our new main man. Professor G in Da House! We’re looking forward to the cultural learnings of Borat for make benefit the glorious nation of Hah-vahd!” One anonymous Harvard faculty member, quick to point out the brilliant idea of bringing Mr. Cohen to campus, also pointed out that his arrival will likely lead to a “huge ramp-up” in subscriptions to the Harvard Business Review as well as “a quick boost to the top line revenues generated by all the capitalistic endeavors of the Harvard Business School.”