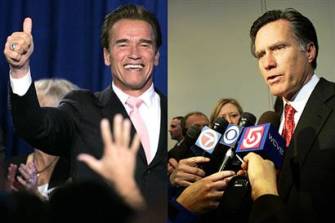 Science issues are lining up to be a big part of the political jockeying by the 2008 presidential hopefuls. Plans are in the works to make Framing Science the-go-to-site for news and insight tracking the candidates’ strategies and positions. So stay tuned…but today, an update on the GOP side.

Former MA Gov. Mitt Romney has emerged as a hot ticket on the GOP fundraising trail, reportedly raising millions, and accumulating top staff to join his Boston HQ. Meanwhile, Washington buzz is that he is already the candidate of choice among Christian conservatives, based on his strong anti-abortion stance and his move to the right on stem cell research.

Senator John McCain, in contrast, hopes that science boosts him with moderate voters, helping to negate his hardline views on the war. McCain continues to push for his bill that would cap greenhouse gas emissions and that would set up an emissions credit trading system. Like fellow presidential hopeful Bill Frist, McCain flip-flopped his position on stem cell research, coming out in favor of expanded funding. “It’s a very complex scientific issue,” McCain (Ariz.) told NBC’s Tim Russert in 2005. “But for us to throw away opportunities to cure diseases such as Parkinson’s and Alzheimer’s and many others I think would be a mistake.”

Though he won’t be running for commander in chief, California Gov. Arnold Schwarzenneger is putting pressure on GOP presidential hopefuls to adopt pro-science stands on global warming and stem cell research. As part of Arnold’s “post-partisan,” “new centrism” strategy, the Governator stands in sharp contrast to right-wing appeasers like Mitt Romney. Here’s how the Boston Globe’s Darrin Jackson describes the contrast in today’s column:

[Schwarzenegger] is now the nation’s most prominent Republican elected official fighting global warming. While Mitt Romney, our own former Republican governor and now presidential aspirant, played to his party’s ostrich-head right by removing Massachusetts from the regional agreement to charge power plants for greenhouse gas emissions, Schwarzenegger this month signed an executive order requiring the state to cut auto and truck emissions. The initative would cut the state’s emissions back to 1990 levels by 2020.

Our new governor, Deval Patrick, announced this week that our state will rejoin the regional initiative. But Schwarzenegger is rightfully the new star of a very real drama because he is willing to cut loose from the six years of ignorant inaction of his party’s standard bearer, President Bush. California alone is the world’s 12th-largest producer of greenhouse gases. The United States produces a quarter of the world’s gases with only 5 percent of the population.

When Rush Limbaugh whines that Schwarzenegger’s rhetoric on global warming “is no different than what Greenpeace could say,” the conservative talk-show host only adds to the notion of a good-as-can-get Republican (Romney had a shot at this notion, negotiating a healthcare expansion copied by Schwarzenegger, but choked on global warming and his frothing quest to kill gay marriage).