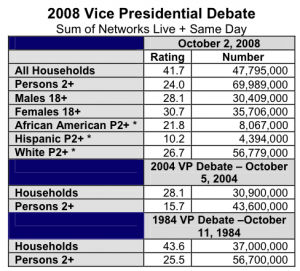 According to Nielsen, close to 70 million Americans tuned in to watch the Biden-Palin debate. For comparison, the 2004 vice presidential debate between V.P. Dick Cheney and Sen. John Edwards drew 43.6 million viewers. The second Bush/Clinton/Perot debate of 1992 also attracted 69.9 million viewers. The all-time debate leader is the Carter/Reagan debate of 1980.

In a CBS News web poll of uncommitted voters who agreed to watch the debate, 46 percent said they believed Biden won the debate, compared to 21 percent for Palin, and 33 percent who were undecided.

The Frank Luntz-Fox News focus group (video below) cuts against these overnight poll returns. In part, there is likely to be some suggestability going on in the focus group based on Luntz’s steering of the questions and the participants knowledge that they are voicing their views on the decidedly partisan Fox network.

Bill Maher’s mockumentary Religulous opens in theaters on Friday. Judging by Maher’s media interviews, it’s more of the same type of sophomoric ridicule that has been so self-defeating to the […]