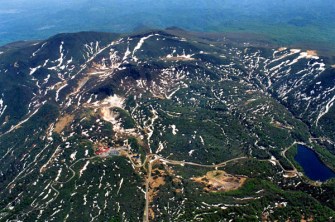 I am always amazed by the number of volcanoes that show signs of activity every year that I have never heard of before. Case in point is this report of activity near Mr. Kurikoma, on the island of Honshu in Japan. The last known eruptions at Kurikoma were back in 1950, and they seem to be water-magma interactions that produce phreatic explosions – and even beyond this 1950 eruption, there isn’t much information about the eruptive history at Kurikoma.

However, if you look at the report, the activity is actually rather far from the summit of Kurikoma – a full 7 km to the southwest. There are areas of hot springs near the volcano, and this very well could be a sign that some increased amount of volcanic gases are making it to the surface. Now, whether this means that any type of eruption might happen is purely speculative, but Dr. Ueki Tohuku University indicates he doesn’t think it is directly related to Korikuma volcano itself. Just another place to keep an eye on to see where it all leads.