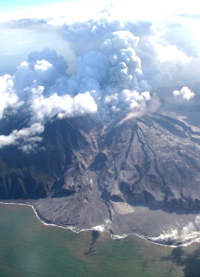 This isn’t really new activity, but a report on the ongoing activity at Soufriere Hills on Montserrat in the West Indies. Soufriere Hills is a composite volcano that has been erupting for almost 11 years now, producing pyroclastic flows and ash fall that have wiped out entire towns on the island of Montserrat. Most of the activity is caused by dome collapses, where the viscous dacite lavas will erupt to form domes that then become oversteepened and collapsed due to gravity. This material is still hot (usually) and forms the deadly pyroclastic flows. Sounds like there have been a few dome collapses in May at Soufriere Hills and the picture above, from the report, was taken on May 20. You can clearly see some of the flows coming down the volcano and the ash plume above it … all this from an article about cricket!