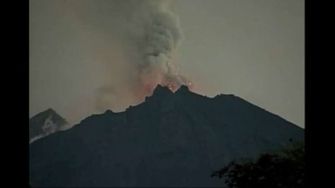 El Reventador, the composite volcano in Ecuador, has been producing explosions and ash for the last few days, so says reports from the country’s  Geophysics Institute. El Reventador is only 100 km from Ecuador’s capitol, Quito, and in 2002 the volcano blanketed much of the city in ash. However, the eruptions currently occurring are much smaller and limited in scope, producing ash and throwing incandescent blocks out near the vent (see above). No evacuations are currently planned. These types of eruptions are typical for El Reventador since 2002, with increased activity every few years producing ash fall, lava flows and pyroclastic flows. Prior to that, the volcano has been quiet since 1976.