There has been a … ahem … healthy discussion of Yellowstone’s current earthquake swarm on Eruptions as of late. We’ve now reached ~1,500 measurable earthquakes over the last 11 days. The latest reports of the continuation of the swarm isn’t going to make anyone happy, but still, there are no signs that (a) this is out of the ordinary and (b) indicates magma making its way to the surface. In fact, if you plot the earthquakes since the 22nd of January, the depth appears to getting, well, deeper: 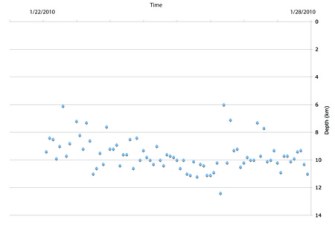 This plot shows the earthquakes listed on the USGS earthquake page since January 22 (oldest to left, youngest to right) plotted against depth. If anything, the earthquakes seem to be becoming more restricted in their depth around 10-10.5 km and definitely not heading upwards. This is not to say that they won’t, but with the evidence right now, the earthquakes seem to be pretty stably around 10-11 km depth. That, to me, seems to back up the USGS/YVO assertion of a tectonic origin – faults at depth (more or less) – rather than magma/liquid moving towards eruption (combined with the fact that the earthquakes are staying approximately the same magnitude range ~ 1-3).

However, you never know with a system like Yellowstone – nothing can really be considered “unrelated” to the caldera and we don’t have a lot of evidence of how large caldera systems might behave before an eruption. However, remember, Yellowstone is just a big caldera – and we have experienced other caldera-related eruptions like Katmai/Novarupta in 1912 and Chaiten in Chile in 2008 – we’re definitely not working with no idea what to expect. We can also model the potential types of behavior of a caldera if it were headed to eruption to at least give us an idea of what might happen, seismically speaking, if an eruptive sequence was beginning.

This earthquake swarm is clearly fascinating and well worth our time and attention. However, delving into conspiracy theories and fear is definitely not the way to go. I’ll try to stay on top of the unfolding events, so watch this space if anything changes!

So why is the current earthquake swarm at Yellowstone not likely to lead to an eruption? Well, mostly because we’ve had so many other swarms that don’t lead to eruption, and this one shows no signs of it being any different.