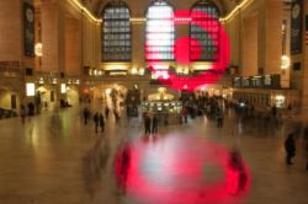 The Wall Street Journal referred to it as “Target’s never-ending quest to be hipper than the competition” — an upcoming fashion show that will feature holograms instead of models. The holograms will be projected in a section of Grand Central Terminal in New York City on November 6 and 7, in a rotating series of 10 minute shows. To widen the possible audience beyond New York City, Target plans to post a video of the show on sites like YouTube and Target.com

You may have already spotted Target ads alerting people to send a text message of the word “model-less” to 827438 (Target) for additional details about the event and to receive exclusive video on their mobile device. In the past, Target has really pushed the creative envelope — including a “vertical fashion show” that took place along the sides of NYC skyscrapers and buying all the ad pages in one issue of The New Yorker. If you happen to be in midtown over the next two days, it may be worth it to check out Grand Central Station.