Today marks the 20th anniversary of one of the most significant eruptions (video – archived from news broadcasts) of the last century (or more) – the 1991 eruption of Pinatubo in the Philippines. The eruption is a landmark event for a number of reasons. First, it was one of the great successes of modern volcano monitoring – the cost in terms of lives and property were greatly reduced thanks to excellent mitigation, monitoring and emergency management. Second, it was an eruption that showed how a single event on the planet can have a global impact, as the “Pinatubo Effect” caused a 4-5 year period of cooling around the globe.

If you’re looking for an excellent summary of the 1991 eruption, check out the USGS page on Pinatubo* – or, if you really want to relive the drama of the events leading up to and during the climactic eruption, watch “In the Path of a Killer Volcano,” possibly the best documentary about volcanoes and volcano monitoring ever made. “In the Path of a Killer Volcano” follows the USGS scientists that headed to the Philippines on the request of PHIVOLCS (the Philippine volcano monitoring agency) to help in planning and monitoring the rising activity at Pinatubo, which at the time was a volcano that people weren’t even sure when it had last erupted. The United States did have a vested interest closely monitoring Pinatubo as two major US military facilities were located within tens of kilometers from the restive volcano, so a lot of personnel and equipment was at risk. The USGS team was part of the Volcano Disaster Assistance Program (VDAP), a group only 5 years old at the time (created after the 1985 tragedy at Colombia’s Nevado del Ruiz) that was set up to help countries deal with volcanoes that are showing signs of unrest and really, Pinatubo was one of the first high profile tests of the crack team of volcanologists. Throughout the documentary, you get to see the tough decisions that volcanologists have to make while watching the sometimes ambiguous signs that a volcano will give as it leads up to (or doesn’t lead up to) an eruption – along with how Air Force and Philippine officials reacted to the USGS volcanologists.

(*If you have a month to spare, check out the USGS/PHIVOLCS volume “Fire and Mud“, a tome that is a mere 1124 pages long as was put together by Chris Newhall of the USGS and the late Ray Punongbayan.) 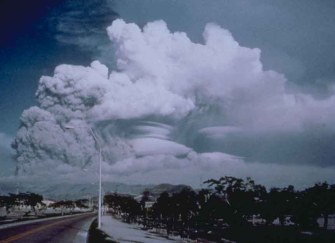 Pinatubo’s eruption column on June 12, 1991 – a “throat-clearing” eruption prior to the climactic eruption on June 15.

The long and short for my first point for the Pinatubo eruption is that volcano monitoring works. It is estimated that the effective monitoring of Pinatubo, with the accurate prediction of when the eruption would begin, saved the thousands of lives and over $56 million dollars (1991 value) were saved – with a total cost of $1.5 million spent on the monitoring effort by the USGS and PHIVOLCS. Even if you include the costs to set up VDAP prior to the Pinatubo eruption (~$15 million), the benefits of having an effective and modern volcano monitoring strategy (including equipment, scientists and plans) far outweigh the costs of such. This is something that can only be done by government, so it is vital that the USGS VDAP program continues to be funded for the next Pinatubo (which could be in our backyard). 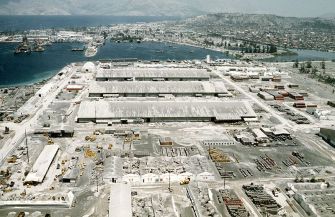 My second point about the 1991 eruption was its global impact. For most Americans and Europeans, the Philippines seem an awful long way away, so to think that an natural disaster in the Philippines might have a direct effect on you and your family in, oh, Kansas, can sometimes seem far-fetched. However, explosive volcanic eruptions are very special kinds of natural disasters as they can hurl their products into the atmosphere, where ash and volcanic aerosols can be spread around the world in as little as a few weeks. Pinatubo was a large volcanic event – a VEI 6, releasing around 10 cubic kilometers of tephra over the course of the eruption (having trouble with 10 cubic kilometers – try thinking of it as as every square meter of a football field covered in 1,652 km of ash – roughly the distance from Chicago to Denver!) Not only that, but the eruption of Pinatubo was an especially sulfur-rich event, meaning that lots of sulfur dioxide (estimated at 18,500 kilotons in the June 15-16 eruption alone – 3 times larger than any event recorded by the previous 13 years of TOMS observations) made it into the upper atmosphere and sulfur dioxide does an excellent job of blocking sunlight from reaching the surface of the Earth. This, of course, ends up cooling the surface of the planet, which then effects weather and biological activity. The Pinatubo eruption is thought to have cooled the global climate by 0.25°C, which might not sound like a lot, but when you realize that is an average temperature across the entire globe, then you can see that it might mean very extreme changes in some places that are balanced with less extreme in others (i.e., no change in the polar regions would require a much higher change in the mid-latitudes to end up with a global average of 0.25°C). However, even with this profound impact on the Earth’s atmosphere, the effect from Pinatubo was like most volcanic perturbations – relatively short – and the Earth’s global temperatures returned to the nominally warming trend by 1995.

The global reach of the sulfur dioxide from the 1991 eruption of Pinatubo.

Now, this post on the 1991 eruption of Pinatubo doesn’t really do the eruption justice. I haven’t even gotten into the impact the eruption had on the Philippines, where lahars from reworked ash of the eruption occurred for years after the event. Right now, there is still worry of the impact of the eruption, as the new summit crater has filled with a crater lake (that is a bit of a tourist destination – with boating and all; see below) that could potentially breach, creating vast lahars in the drainages around the volcano. However, PHIVOLCS volcanologists think that it would take another eruption to breach the crater lake walls. Speaking of which, many people wonder when the next eruption might be. Well, if we use Pinatubo’s past as a guide, the volcano tends to have large eruptions separated by hundreds, if not thousands, of years, meaning that we are not likely to see another large eruption of Pinatubo in our lifetime (however, never say never with volcanoes). The eruption’s legacy will life on, though. The Philippine government has now decreed that June 15 will be “Pinatubo Day” to commemorate the events of 1991 and remember the over 700 people who did lose their lives in the eruption or from the lahars and disease that followed.

The new crater lake at Pinatubo. Note the recovery of the landscape in the crater after only 20 years.

Our understanding of large volcanic eruptions has increased significantly from research done on the Pinatubo eruption – research that is still ongoing. Studies on a variety of petrologic and volcanologic topics have been done on Pinatubo, including eruption triggering, crystal formation, magma mixing and degassing rates of magma (which are just the tip of the geologic iceberg).

Pinatubo is one of those “historic eruptions” that should be documented in every text book as a case study on how to get volcano monitoring right. It should also remind us that an eruption doesn’t need to be nearby to effect our daily lives (even if you might not directly notice it), but also that the landscape and society recovers quickly even after a major eruption. We might not expect Pinatubo to erupt at this magnitude again for hundreds of years, but you can be sure that somewhere on the planet is another “Pinatubo” that might erupt in our lifetimes.

Top left: A classic image of the June 15, 1991 plume from Pinatubo. Click here to see a larger version (albeit slightly different vantage).

So it might not be so good for ratings to be doing a series on a movie that tanked at the box office.  But here’s some more on NEVER LET […]