Many of us don’t think much about the back of our business cards. I think they’re an opportunity. Here’s what it says on the back of my card:

… and they all crossed their fingers, hoping … despite little to no investment in their leaders … despite making conscious, intentional decisions to keep it out … that somehow their students and staff would be prepared for the digital, global world that surrounded them …

I’ll probably word this a little differently next time, but I think this gets my message across that we need to better invest in our leaders and that we need to recognize that schools must be critically engaged in the preparation of digital citizens / workers. I always hand out my card with the back facing up so that the recipient at least sees that there’s something there.

What’s on the back of your business card? What could / should be? 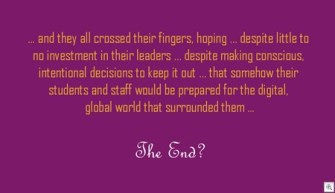 Three great questionsI especially like the last of these three questions from Rodney Trice. We should be asking teachers and principals that question more often (and just that directly).How do […]