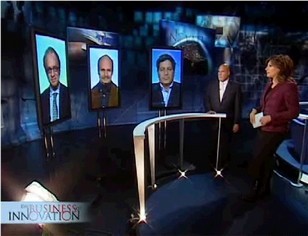 In part 4 of CNBC’s Business of Innovation TV special, co-hosts Maria Bartiromo and Roger Schank explore the role of people & technology in the innovation process. They kick off the show with a wide-ranging discussion involving three top CEOs who have first-hand knowledge of how technology can enable new types of customer experiences — Andrea Illy (Illy Coffee), Bob Greifeld (NASDAQ) and Dane Neller (On-Demand Books). Later in the show, Maria and Roger chat with three true visionaries (pictured above) — Ray Kurzweil, Paul Saffo, and Bill Taylor (author of Mavericks at Work and the founder of Fast Company magazine). Kurzweil and Saffo are probably two of the more interesting guests that have appeared on the Business of Innovation series, and it’s clear that the two have done some serious thinking about the future. (Even Roger, who seems to delight in tearing down the accomplishments of other guests, seems to be in awe of Kurzweil, who has come up with a unique viewpoint on the future of humanity.)

The one-hour segment also includes a number of brief feature pieces on companies like uWink (founded by Nolan Bushnell, the creative genius behind Atari and Chuck E. Cheese); Second Life and Ralph Lauren Polo. Plus, there’s an interesting piece on dual-format DVD players and a brief recorded interview with Bill Gates, who talks about the future of medical innovation from Davos.

Like the other three innovation segments that have already appeared on CNBC, the show doesn’t really answer any questions — it’s really just a cool montage of images, interviews, discussions and sound bites, all mixed together into an hour show. (It seems like the only sponsor for the program is IBM, so even the commercials seem to blend together into the show)

[image: Maria and the three futurists]