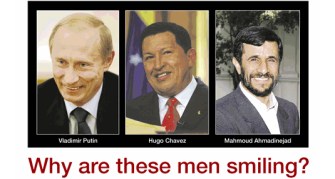 Excerpt from coal and utility advertisement run in Kansas

Back in November, by framing their advertising appeals in terms of economic competitiveness and patriotism, a coal company and utility effectively promoted it attacks on the governor of Kansas. Their claim, conveyed powerfully in ads as shown above, argued that the governor’s rejection of two power plant applications on the basis of greenhouse emissions would force the state to rely on natural gas from an Axis of near-Evil that included Venezuela, Iran, and Russia.

The Wichita Eagle newspaper responded with both a print editorial and an innovative “online video editorial” defending the Governor and criticizing the coal and utility company. At his new blog Dot Earth, the NY Times Andrew Revkin has the details here and here.

At X-Mas, A Call for Scientists to Join with Religious Leaders

A X-Mas GoracleIn an editorial in the latest issue of the journal Climatic Change, Simon Donner argues that scientists need to join with religious leaders in communicating the urgency of […]