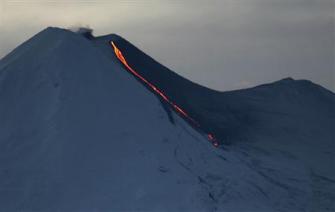 Llaima (Chile) is experiencing an increased tempo in its current eruption. The National Emergency Office in Chile is reporting that the eruption has begun to take a more explosive character, with pyroclastic material being shot hundreds of meters from the main vent. Although the officials have not changed the current status of the evacuation, which has been limited to 50 people closest to the volcano, they are pondering their next step if the week-old eruption continues to escalate.