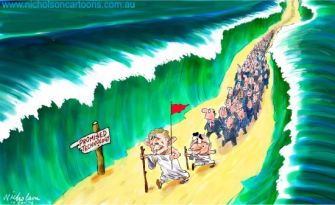 Tony Snow denies reports from sources close to UK prime minister Tony Blair that Bush will use next week’s State of the Union address to announce plans for the US to adopt a “Kyoto-like” mandatory cap on emissions, part of the administration’s move towards “more radical measures” on climate change.

For Bush to flip-flop his position on climate change might seem highly unlikely, but there is at least one interesting indicator in these reports. They are consistent with how the administration has cultivated journalists, pundits, and the public in advance of other major (and at one time unexpected) announcements.

Consider that in the summer of 2001, weeks before Bush’s presidential address from his ranch announcing his “compromise” position on stem cell research, he leaked the news by way of the remarks of religious advisers who had consulted with the president. And just recently, Bush paved the way for his decision to send more troops to Iraq with the now notorious “surge and accelerate” frame device that was floated in the news for weeks before his national speech.

Could a similar communication strategy be at play in preparing the nation for a Bush turn -around on climate change?