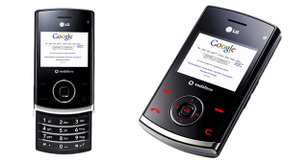 Is anyone else getting the feeling that Google is turning its attention away from Microsoft to focus on a potential rivalry with Apple? Nearly a month after Apple announced its groundbreaking new iPhone, Google casually leaked rumors to the press of an upcoming Google Phone release. Will the rumor of a Google Phone stop people from buying the iPhone? It remains to be seen, although from the Wall Street Journal report (link via InfoWorld), it sounds like Google is planning to change the way that people pay for their wireless phone service: “[Unlike the Apple iPhone], Google’s product would draw its revenue from a sharply different source, relying on commercial advertising dollars instead of the sticker price of at least $499 for an iPhone and $60 per month for the AT&T service plan.”

Turning the existing business model on its head won’t be easy, though, warn analysts:

the fairest way to split those advertising revenues with service

providers could be a big hurdle for Google, one analyst said. Another

prospect of listening to advertisements before being able to make phone

“I don’t know how successful it’s going to be. The model of an ad-supported wireless Web has not been successful over the past 10 years,” he said, referring to municipal Wi-Fi networks that offer free Internet connections to users willing to view advertisements while they surf the Web.

listen to ads. So this is mainly for teenagers, twenty-somethings, high

schoolers or people who can’t afford a phone,” said Kagan.”

Anyway, according to Wired Magazine’s Gadget Lab blog, it’s already possible to buy the so-called “Google Phone” in France and Italy. Plus, rumors persist that Google is buying up wireless spectrum in the U.S. ahead of some big wireless play.