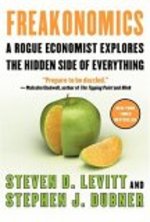 This was bound to happen, sooner or later. All the media buzz around the innovative new brand of economics known as “Freakonomics” (after the best-selling book of the same name) has led to a highly critical piece by Noam Scheiber in the April 2 issue of The New Republic called Freaks and Geeks: How Freakonomics is Ruining the Dismal Science. As Scheiber explains, “One purveyor of Freakonomics was good fun. A whole profession of them is sheer madness.”

Scheiber basically argues that the economics field has turned into economics lite (he refers to it as “cute-o-nomics”). Quite simply, researchers prefer to “obsessively hunt for sexy topics or quirky anomalies” rather than solve real-world economics questions. The article at The New Republic is subscription only, but the Wall Street Journal highlighted the piece in its “Informed Reader” column on Wednesday:

“A new generation of economists has become so addicted to cleverness that dull but genuinely useful research is under threat. Instead of addressing big, complicated questions such as poverty or productivity, these economists study sumo wrestling, point-shaving in college basketball, U.N. diplomats’ parking tickets and irrational catalog shopping…”

The article examines why economists have embraced Freakonomics at universities around the country. For one, they have had a difficult time reliably crunching numbers when it comes to the tough topics. Plus, “cute-o-nomics” is great for young researchers embarking on the tenure track: “Clever, accessible topics attract more attention than the ‘noble’ old ones. What’s more, papers about people paying too much for gym memberships take less time to compile than, say, devising a useful way for economists to measure the obstacles children face in life.”

As of Thursday morning, no real response from Levitt and Dubner over on the Freakonomics blog. On March 26, Steven Levitt linked to the article and wrote, “For what it is worth, I disagree.”