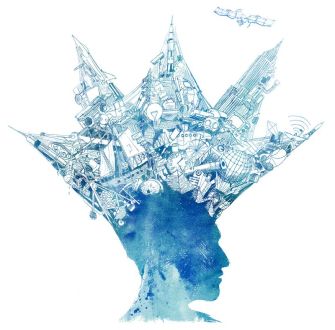 Ahead of the upcoming Consumer Electronics Show in January, Threadless recently announced the winner of the Threadless Loves Innovation t-shirt design contest. Deborah Kassoff, a member of the judging panel, explains why the judges chose David Fleck’s winning design for Innovation Revolution:

“Innovation Revolution” presented the
concept of innovation as a result of the human mind. The complex image
immediately conveys that very simple message. At first glance you see
the mind-bogglingly comprehensive forest of amazing things humanity has
created. Then upon closer inspection you see more – innovation is
medicine, communications, music, entertainment, transportation,
architecture. Look again and you’ll notice a chronological telling of
the story of innovation – a wheel, a sundial and Egyptian pyramids lead
the way to a telescope, a sailing ship, a submarine and a hot-air
balloon. Now look even closer. A television, a locomotive train, a syringe, a satellite dish, the Concorde and the Empire State Building.

This is a work of art that moved me with a sense of awe of what mankind
has been able to create over time. It also makes clear that innovation
is what brought us the fascinating, life-altering technologies which
are entwined, but perhaps not often thought about, in our everyday
lives.”

As the grand prize winner, Scotland’s David Fleck wins an all-expenses trip to the CES (Consumer Electronics Show) in Las Vegas in January 2010. At the end of December, the Innovation Revolution t-shirt will be available for purchase on Threadless.

n One of the most misunderstood terms in the business world is disruptive technology. Too many companies — and the marketers in charge of bringing these companies’ innovations to market […]