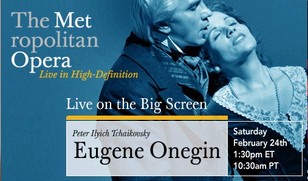 nFans of the now-deceased Business Innovation Insider may remember that I posted about a live simulcast of the Metropolitan Opera in Times Square last fall. It was all part of a broader strategy by the Met to bring opera to the masses (people in Times Square were actually stopping and looking up at the screen – and it wasn’t just the tourists, either) Well, based on the success of that initial effort, the Met is now rolling out a nationwide program called “Live on the Big Screen.”

This Saturday, for example, there will be a live simulcast of Tchaikovsky’s “Eugene Onegin” at a theater in Union Square — part of a whole series of Met Opera Saturday matinee performances scheduled for the big screen, featuring HD and surround-sound. The ticket’s aren’t cheap ($18 in New York), which leads me to think this could become a real money-maker for the Met. In addition to selling 1,000 or so seats at Lincoln Center, the opera company is also selling thousands of “seats” across the country. Once you net out the cost of renting the cinema screens and hooking up all the electronic gadgetry needed for the simulcast, methinks a tidy little profit would remain.

Anyway, New York Magazine has posted an interesting review of “Eugene Onegin,” which features some of the biggest names in the opera world. Apparently, the Met is marketing this production as a “steamy” love story that will captivate theater audiences everywhere:

“Perhaps you’ve seen the promos for Eugene Onegin, coming soon tona movie theater near you. It will be a live high-definitionntransmission of the February 24 matinee direct from the MetropolitannOpera to some 150 film palaces from L.A. to London, and moviegoers arenpromised a steamy afternoon—or evening, if they happen to be in thenU.K. The “star soprano” with the “sumptuous voice” Renée Fleming singsnthe role of the love-starved Tatiana for the first time at the Met, andnshe is “joined by a supremely talented troika of the coarser sex” whon”provide the testosterone” in her life. They include “the charismaticnand smoldering” Russian baritone Dmitri Hvorostovsky, the “superbntenor” Ramón Vargas, and conductor Valery Gergiev, considered in somenquarters as the most mesmerizing personality to emerge from St.nPetersburg since Rasputin, whom he vaguely resembles.”