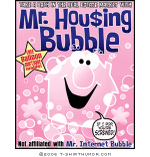 nEver wondered what would happen if every U.S. CEO really said what he or she thought, instead of saying what he or she thought shareholders and employees wanted to hear? Check out the comments of D.R. Horton CEO Donald Tomnitz, who stunned the audience at a recent Citigroup investor conference with his bleak forecast for the U.S. housing industry:

“Yesterday, Donald Tomnitz, CEO of D.R. Horton (ticker symbol: DHI), flipped his lidnspeaking at a Citigroup investor conference. “I don’t want to be toonsophisticated here, but 2007 is going to suck, all 12 months of thencalendar year,” Tomnitz blurted out during a Q&A session. Might notnbe one of the seven dirty words you can’t say on television butnshareholders should take note whenever the CEO loses his or her cool.”

Not surprisingly, shares of the battered homebuilder fell another 1.45% on Friday, as investors decided that there is only one possible interpretation for the word “sucks.”