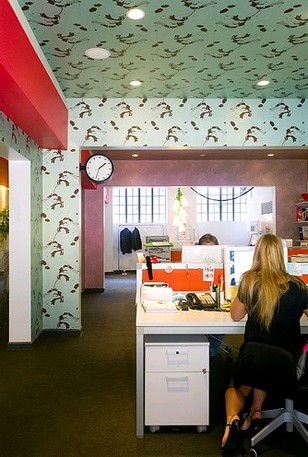 In last week’s edition of Readymade News, Chad Farneth pointed out a number of sites highlighting innovative workplaces around the world:

“We like to think of ourselves as pretty creative people. One thing we

see time and again when we visit clients is a pretty uncreative space.

We visit “innovation directors” who live in cube farms. We see

employees who long for change and anything different, and we

immediately appreciate where we work, despite the random rogue

ping-pong ball or the occasional reflection from the disco ball. You

get more work completed when you are happy and stimulated. We found

some of the most stimulating and interesting workplaces for your

perusal. We offer This Ain’t No Disco as a resource to see what others are doing.For those of you who prefer to read about creative space, we offer Alexander Kjerulf’s take on cool workplaces coupled with his book, Happy Hour is Nine to Five. And if you don’t believe us that taking some time to contribute to a healthy workplace is worth it, perhaps this article by the UK design council will win you over.”

A big hat tip to Stefan Boublil of The Apartment — his innovative workplace is now being featured on This Ain’t No Disco. I had the privilege of meeting Stefan at a recent Cool School event hosted by my colleagues at ElectricArtists.