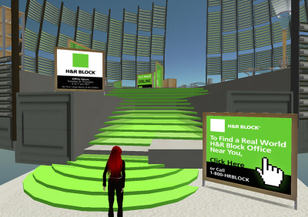 With the April 17 tax filing deadline just around the corner, H&R Block has launched the first-ever “virtual tax experience” in Second Life:

“The company that first brought tax preparation to Middle America more than 50 years ago is once again breaking new ground – not with an office on Main Street, but with a high-tech island in a virtual universe populated by millions of digital citizens from around the world. H&R Block, the world’s largest tax preparation company, is now the first in its industry to open up shop in the fast-growing 3D online universe known as Second Life.

The company today launched “H&R Block” Island, a new destination for the multitudes of people who spend more than 7 million hours per month as they live, work and play in Second Life. With digital tax professionals sharing free advice, providing access to the latest tax preparation products, and hosting tax-related events, tax time may never be the same…”

Anyway, the new H&R Block “virtual tax experience” sounds interesting, especially if you’ve already been hoarding your Linden Dollars in Second Life. If you have an unnatural fear of discussing your tax situation with the IRS or even with your local tax preparer, it’s easy to see how a virtual sit-down with an H&R Block avatar might be a little less stressful. (The two H&R Block avatars, Rex and Hope, will be holding virtual tax discussions every Tuesday and Thursday evening until April 17). One day soon, a visit to “H&R Block Island” may be just as enjoyable as a trip to the real Block Island!