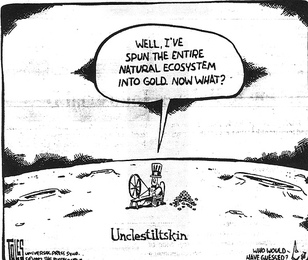 This thought-provoking cartoon, distributed by the Universal Press Syndicate, is called Unclestiltskin. What happens to America when we deplete all of our natural resources and realize that we’ve squandered away our long-term future in favor of short-term profits? If you’re a company like Halliburton, of course, the answer is simple: you just move to Dubai and continue business as usual. For other companies, the answer is likely to be much more complex.

Which leads to a digression of sorts from “natural ecosystems” mentioned in the editorial cartoon to “business ecosystems.” Companies need to realize that they function as part of a living, breathing business ecosystem, and that the elimination of even a single participant in this ecosystem can have serious consequences.

A recent Toyota Motor Company feature in FORTUNE magazine (“America’s Best Car Company”) really highlights this point. A Toyota executive explains that the company is doing everything possible to ensure that Detroit’s Big Three (Ford, GM, Chrysler) continue to survive within the automotive ecosystem, even as Toyota continues to gain market share in the U.S. If, say, Ford turns belly-up, Toyota knows that it will be facing the mother of all corporate backlashes in the USA:

“We understand that as Toyota’s presence increases, expectations and

Nuances will matter more than ever. When then-chairman Hiroshi Okuda in

2005 said Toyota might raise prices to take pressure off GM, the

financial collapse of one of the Detroit Three. Jim Lentz tries his

best to deflect such talk. “We’re all in this together,” he says of his

If Toyota cares so much,

why is it entering Detroit’s last bastion of comparative strength? But

offer consumers a choice. The status quo, as he needn’t point out, has

served Toyota well. Despite occasional Japan bashing, Toyota has been

able to grow. This process that has been gradual enough that the

company is now an accepted – in fact, admired – part of the U.S.

landscape. The dramatic failure of any of the Detroit Three would

destabilize the industry – and make Toyota the villain. “The most

Jim Womack, “is to manage the decline of the domestics.”