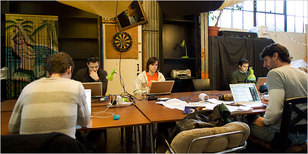 nOne reason for the vibrancy of American innovation is the proliferation of “third places” – places like the corner coffee lounge – where freelance workers and mobile digerati can meet, greet and socialize in an environment that is neither home nor office. Last week, Dan Fost of the New York Times profiled the newest iteration of the “third place” — coworking collectives that meet in urban lofts to get work done. As Dan points out, these coworking collectives try to blend the best of both worlds:

“Contemplating his career path a couple of years ago, a youngncomputer programmer named Brad Neuberg faced a modern predicament. “Itnseemed I could either have a job, which would give me structure andncommunity,” he said, “or I could be freelance and have freedom andnindependence. Why couldn’t I have both?”

As someone used tonhacking out solutions, Mr. Neuberg took action. He created a word —ncoworking, eliminating the hyphen — and rented space in a building,nstarting a movement.

While coworking has evolved since Mr.nNeuberg’s epiphany in 2005, dozens of places around the country andnincreasingly around the world now offer such arrangements, wherensomeone sets up an office and rents out desks, creating a community ofnpeople who have different jobs but who want to share ideas.”

The only catch, of course, is that you don’t always have a lot of control who you’ll be working next to for the day — especially for the lofts or other spaces that allow “drop-ins” for the day.