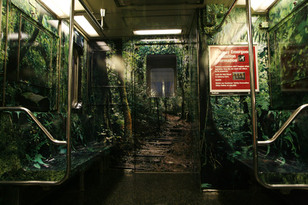 New Yorkers taking the shuttle between Grand Central and Times Square discovered today that the subterranean subway had been completely transformed into a variety of exotic landscapes, including a lush tropical rainforest. The subway makeover wasn’t the initiative of Mayor Bloomberg — instead, it was the result of an innovative new advertising campaign (“This is How it Should Feel”) from Westin Hotels & Resorts. Given the striking visual appearance of the subway, it’s perhaps no surprise that A-list blog Gawker has already posted a video (Westin Ads Junglify the Subway) of the innovative new advertising campaign in New York City.

Anyway, stay tuned over the next few days – my colleagues at ElectricArtists are launching a website in conjunction with the subway transformation!

[image: “This is How It Should Feel”]